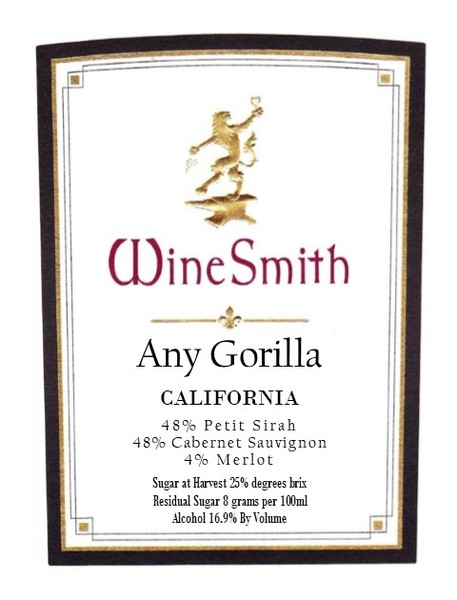 Port
CA - California
$25.00 / 375 mL Bottle
In the wonderful feature film Wine DIamonds, critic Bob Foster declares, "Any gorilla can make wine in California." Ain't it the truth! This wine emulates Old World traditions by blending failed wines from older vintages with some 2018 Petite Sirah juice and magic happened! It wasn't hard. But Bacchus smiled on the idea. A classic accompaniment to Stilton cheese, glazed walnuts and celery. Cigar fanciers will find uses, and one would also be forgiven to pair it with fine chocolate.

This forgery of vintage port is a little lower in alcohol than most port wannabes.

Ain’t it the truth! So when we decided to make a forgery of vintage port, and forbidden by the Fedsto call it that, we chose Bob’s observation as an appropriate proprietary name for our fortified sweet red.

In all candor, this wine is a mish-mash of pieces that failed as standalone dry reds whose flaws became virtues when married together. Our base was an overripe 2017 Lodi Cabernet whose dry tannins made it unacceptable for our graceful Eurocentric style.

For age, we exhumed a single barrel of 2006 Meritage we somehow forgot to bottle a decade ago. In 2018, we threw these together, blended in two tons of glorious, freshly crushed Lake County Petite Sirah and two barrels of high proof neutral brandy and voilá!

It wasn’t hard, and all happened in an hour. But Bacchus smiled on the project, and we ended up with a convincing port knock-off, albeit with a bit less alcohol.

Use it as you would a vintage port: Stilton cheese, glazed walnuts, dark chocolate, celery, Cuban cigars and a roaring fire.

Elevage details:
Cellared in very old French oak.
Bottled 45% and left the rest in wood.
Who is to say our next move?