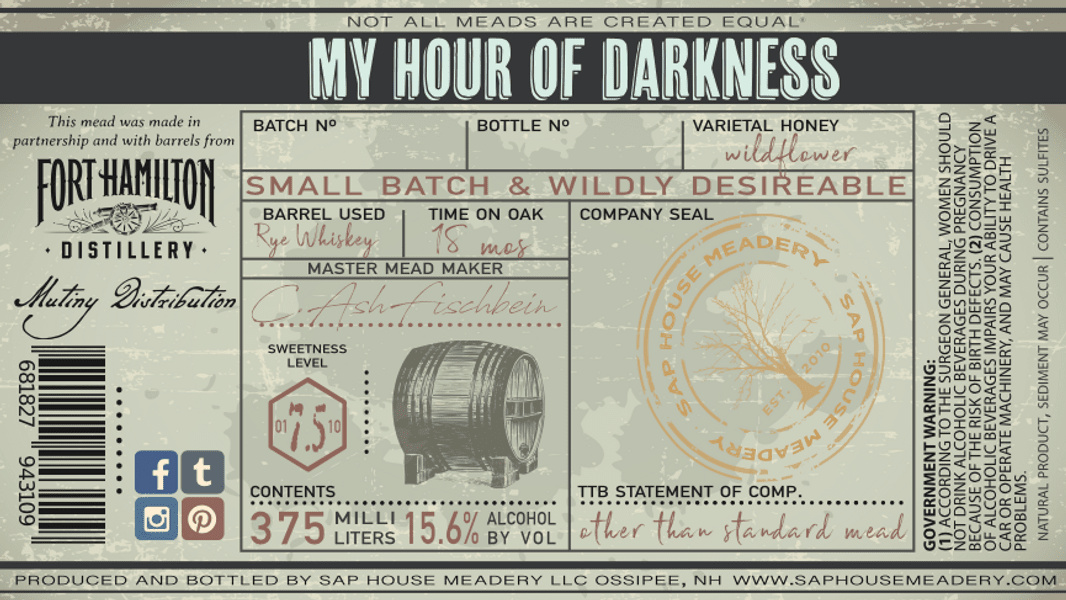 My Hour of Darkness

Honey
NH - Other
$35.00 / 375 mL Bottle
This wildflower mead is made with the collaboration efforts of Fort Hamilton Distillery and Mutiny Distribution in NY.
Fort Hamilton Rye Whiskey is one of the best whiskeys on the market. We were lucky enough to procure these barrels via Mutiny Distribution and age our meads in them!
These barrels, once emptied, are traveling back to Fort Hamilton Distillery and they will be aging their fine whiskey in these now mead barrels! We cannot wait to get our hands on those bottles!

Fort Hamilton Whiskey
Fort Hamilton whiskeys are barreled at a low proof for a smoother profile that emphasizes the rye grain over the barrel, promoting a softer, fruit-driven style of rye. It is non-chill filtered & aged in heavily charred new American white oak barrels on the Brooklyn waterfront for years.

Where Are You
Sitting with mysterious millionaire Jay Gatsby and watching his obsession to reunite with his former lover, Daisy Buchanan.
Hanging with J.P. Morgan in his home on Madison Avenue while he cinches a deal with Carnegie to buy the Carnegie Steel company for $480 million, giving him a 70% control of the country's steel production.

Our Words
A revolution rather than an evolution, enjoying every mile on route 66 in the 1930s, a cask of distinction

Did You Know
In August 1775, Alexander Hamilton’s Hearts of Oak Militia orchestrated a daring raid on lower Manhattan. Under fire from HMS Asia, they seized and repurposed the battery of British cannons, thereafter, forming America’s first artillery company.