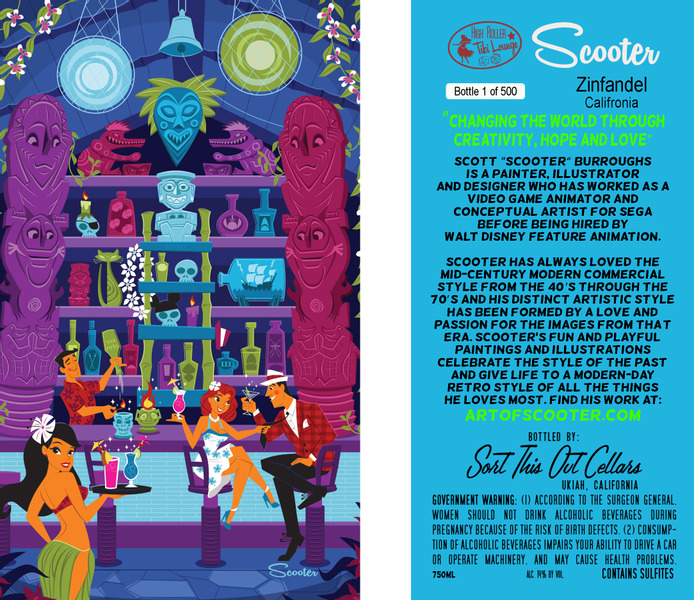 Flavors of cherry cola and caramel notes finish with lingering pepper, sweet tobacco, and cocoa notes.Date night at the tiki bar calls for tropical libations and occasionally a beer or glass of vino. Who wouldn't want to end a day of amusement and escapism with a little more escapism?

“CHANGING THE WORLD THROUGH CREATIVITY, HOPE AND LOVE…”
Scott “Scooter” Burroughs is a painter, illustrator and designer working in Colorado Springs, Colorado. He graduated with his BA from Academy of Art University in San Francisco, California in 1994. Upon graduation he worked as a video game animator and conceptual artist for Sega before being hired by Walt Disney Feature Animation. Scooter worked 10 years for Disney as an animator on movies and mentor for new artists. His credits include: Pocahontas, Hunchback of Notre Dame, Mulan, Tarzan, Fantasia 2000, The Emperor’s New Groove, Lilo And Stitch, Brother Bear and several shorts. When the Florida animation studio closed its doors, nearly 20 years ago, he moved back to Colorado and began a career in illustration, fine art painting and design.

Scooter has always loved the mid-century modern commercial style from the 40’s through the 70’s and his distinct artistic style has been formed by a love and passion for the images from that era. Scooter's fun and playful paintings and illustrations celebrate the style of the past and give life to a modern-day retro style of all the things he loves most.

Check out www.artofscooter.com for more of Scott's work.