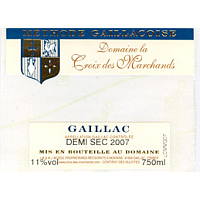 Sparkling
Gaillac AOC
$19.00 / 750 mL
$21.00 MSRP
The village of Montans was a crossroad for the pottery trade from Roman times. It was also an important area for wine production, and the wine amphoras produced in the area (and presumably filled with local wine) have been found as far away as Northern Scotland and Southern Spain. The village is part of the Gaillac AOC in the Languedoc. Jerome Bézios produces wines under two labels: Domaine la Croix des Marchands, a tribute to the traveling merchants of the past, and Château Palvié, a subsection of the property named for the family that owned the property before the French Revolution. First Vine is the first importer to bring M. Bézios’s wines to the U.S.

The Gaillac region of France produces some Bordeaux-style wines, and also wines with local varietals, some of which have been grown for centuries. M. Bézios focuses on the best of the locals. “Methode Gaillacoise” is a sparkling wine made from 100% Mauzac, the region's oldest varietal. Mauzac is a grape that can be either fruity, sweet, dry, or spicy depending on vinification, but it has a sort of pear and green apple flavor that comes through. The wine is crisp, fresh, slightly sweet, lightly fruity, a real treat.