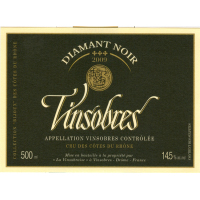 Red Blend
Vinsobres AOC
$16.00 / 750 mL
$18.00 MSRP
The Cave in Vinsobres is a cooperative winery. Vinsobres is located at the top of a mountain and provides south-facing slopes at higher altitudes that allow production of high-quality grapes. Because of this terrain and its reputation for quality, Vinsobres is the first village in the Drôme to receive a Cru designation for its wines. This is the highest designation available for villages in the region and requires the producers to restrict the numbers of acres of production to maintain quality. While wines from Vinsobres are available throughout Europe, the Cave's wines have never been exported to the U.S. Pascal Monier, Director of the Cave, is the second generation of his family to run it -- he took over from his father and has been the driving force behind the AOC's awarding of cru status to Vinsobres. The Diamant Noir is made from grapes from vines at least 30 years old. It's sold as a finer house wine in many restaurants and the region, and has good fruit up front, with great earthy flavor and a nice tannin/mineral finish.

2009 and 2011 were very hot years in the region, but the 2010 was a little cooler. Many wine critics have been excited about the 2010 vintage because it has the complexity and depth of flavor they thought was missing from the hotter years. Vinsobres is at a higher elevation than other villages in the region, so the temperature is a little cooler -- making for a richer earthiness than you'd expect.